According to Section 29 of the Regulations of Legislative Decree No. 1362, Public Private Parentships (PPPs) in Peru constitute one of the forms of private investment participation, in which the risks of the project are appropriately distributed and resources are preferably allocated from the private sector for the implementation of projects, thus guaranteeing optimal service levels for users.

This form is implemented through long-term Contracts, in which the ownership of the executed investments is maintained, reversed or transferred to the State, based on the nature and scope of the project and the provisions of each Contract. These forms may include concession, operation and maintenance, management, as well as any other contractual form permitted by law.

The current definition of PPP is based on the previous legal framework and the best practices at the international level, which consider elements such as a proper allocation of risks between the public and private sectors, and the value for money principle is considered in all stages of the development of a PPP, which seeks the best combination between costs and the quality of the public service provided to the users, throughout the life of the project

PPPs are created at the initiative of the public entities that own the projects or by the private sector through the presentation of Unsolicited Proposals (IPs, for its acronym in Spanish)

It refers to the PPPs that are created at the initiative of the public entities referred to in section 6 of Legislative Decree No. 1362, that is, the Ministries, Regional Governments, Local Governments or other public entities authorized by law. PPP projects created at state initiative result from the planning of each entity, which identifies the needs of the population and the projects that may respond to such needs.

On the other hand, the IPAs of regional or local jurisdiction are presented before the OPIPs of the Regional Governments or Local Governments, as appropriate 1/ .
1/ The IPs are classified as grace requests, pursuant to the provisions of Section 121 of the Consolidated Text of Law No. 27444, General Administrative Procedure Act, approved by Supreme Decree No. 006-2017-JUS, when relevant. Consequently, the right of the proponent ends with the presentation of the IP before the OPIP, with no further possibility of questioning or objecting the decision in administrative or judicial office

Difference of PPP according to their origin 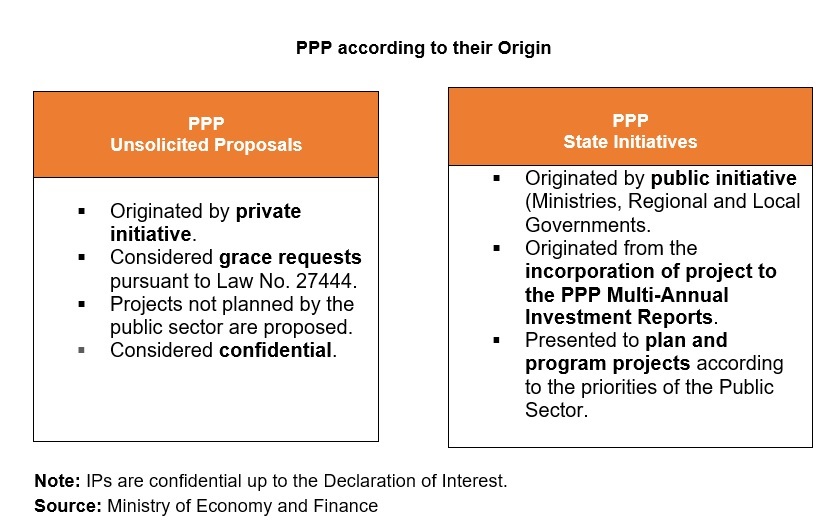 As indicated in paragraph 13.1, Section 13 of the Regulations of Legislative Decree No. 1362, those projects meeting any of the following criteria are assigned to PROINVERSIÓN in its capacity as OPIP: