NEWS
TENDER FOR ESSALUD HOSPITALS OF PIURA AND CHIMBOTE ATTRACTS COMPANIES FROM EUROPE, AMERICA, AND ASIA KUELAP GONDOLAS PPP PROJECT DOUBLED THE NUMBER OF TOURISTS IN THE ARCHAEOLOGICAL CENTER COMMITTED INVESTMENTS OF PPP IN AIRPORTS AMOUNT TO US $ 2,500 MILLION INVESTMENTS IN PPP EXCEED $ 3,600 MILLION AND CONTRIBUTE TO SUSTAINING ECONOMIC ACTIVITY MORE THAN 1,561 NEW RURAL TOWNS WILL HAVE 4G MOBILE TELEPHONE AND INTERNET SERVICES PROINVERSIÓN AWARDS PUERTO MALDONADO-IBERIA TRANSMISSION LINE AND CHIRA VALLEY SUBSTATION COAR CENTRO WILL PROVIDE EDUCATIONAL INFRASTRUCTURE TO 900 STUDENTS IN PASCO, HUANCAVELICA AND CUSCO ELECTRICAL INFRASTRUCTURE FOR ICA: CONTRACT SIGNED FOR THE CONSTRUCTION OF TWO NEW STATIONS FOUR BIDDERS WILL COMPETE FOR THE CONSTRUCTION AND OPERATION OF PUERTO MALDONADO WWTP PROINVERSIÓN PROMOTES INFRASTRUCTURE PROJECTS TO EUROPEAN AND NORTH AMERICAN INVESTORS MEF MAINTAINS A 10% GROWTH RATE FOR 2021 PROINVERSIÓN HAS JOINED THE WORLD ASSOCIATION OF PPP UNITS AND PROFESSIONALS PROINVERSIÓN EXPECTS TO AWARD PROJECTS AMOUNTING TO US$ 2.5 BILLION THIS YEAR PROINVERSIÓN CALLS AN INTERNATIONAL COMPETITIVE BIDDING FOR THE ANCÓN INDUSTRIAL PARK PROJECT

Lima, August 23, 2021.- The Private Investment Promotion Agency has carried out an evaluation of the impact of Public-Private Partnerships (PPP) in the economic development of the country and in specific segments. One of them is the port sector where investments through the PPP modality have generated greater productivity and a boost in foreign trade.

Eight ports of Peru under concession were evaluated through the mechanism of Public-Private Partnerships, and it was identified that they generated significant direct and indirect investment flows for the country and were the key condition for the take-off of Peruvian exports, especially non-traditional exports.

How have we achieved this successful performance?

First, the ports created enormous direct and indirect investment opportunities. Between 2001 and the first half of 2021, the eight ports generated a direct investment flow of US$ 1,726 million. However, the improvement and expansion of the ports was only the starting point for complementary and indirect investments such as roads, warehouses, trailers, among others, which boosted economic growth and productive diversification towards other products of high international demand, such as avocados, blueberries and asparagus. 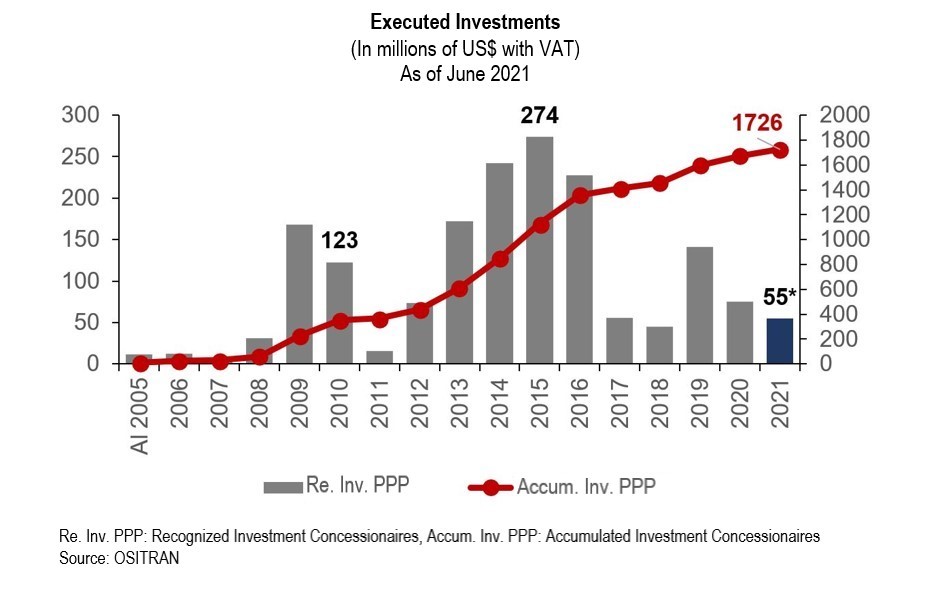 Second, port concessions increased the installed capacity to export, but also improved their efficiency, which generated significant cost reductions for companies. For example, the exported cargo has multiplied almost three (3) times in the last 20 years, going from 17,095 thousand tons in 2001 to 48,517 thousand tons in 2020. 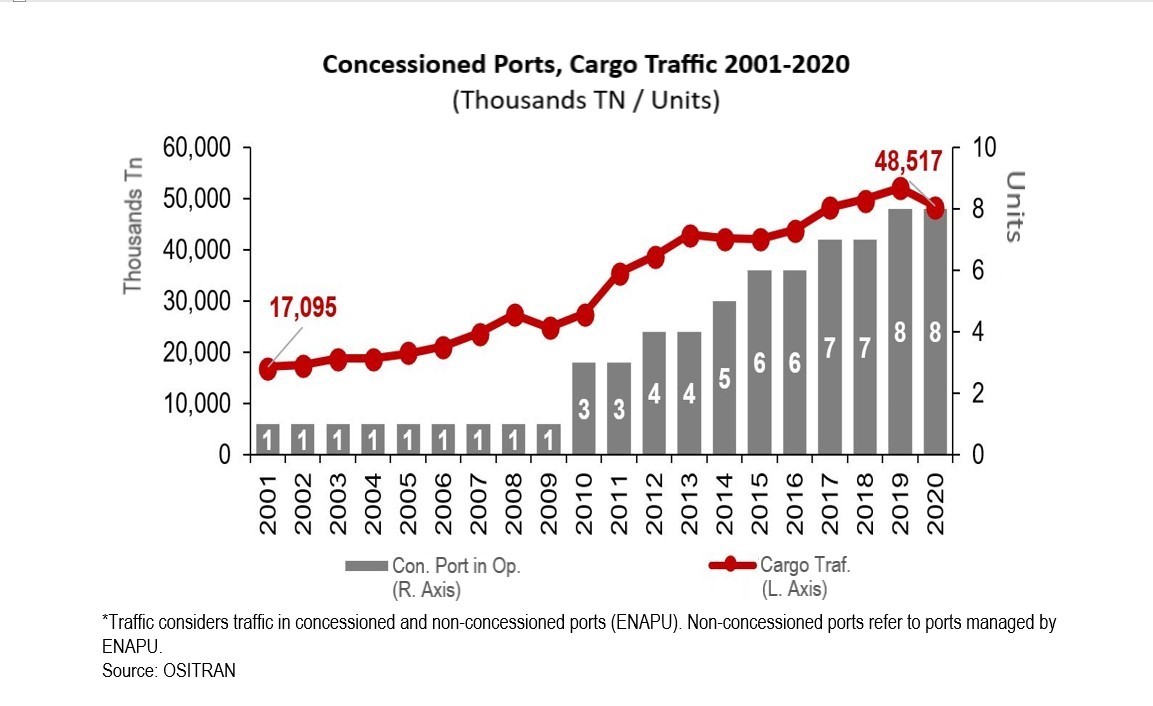 Regarding the efficiency indicators, by the end of 2019, cargo removal time was reduced by 20% and the performance per hour increased 52.8% in the new Callao container terminal. These efficiency improvements have only translated into lower costs for exporting companies and more space to accelerate their investment pace. 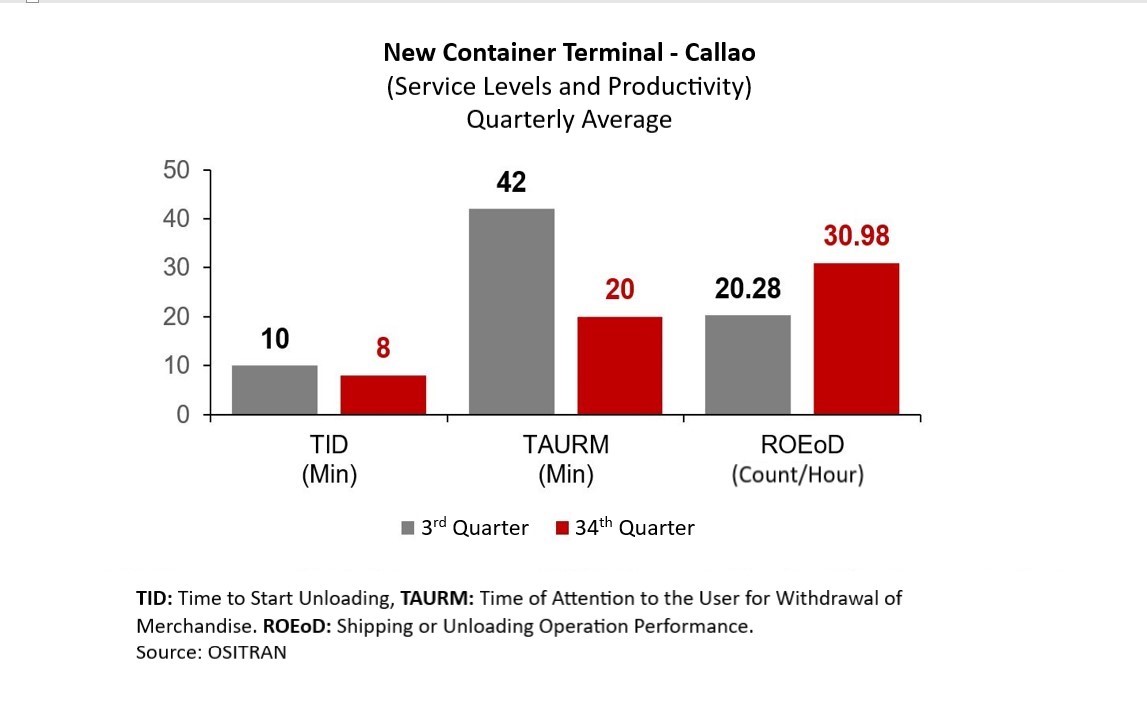 Currently, seven (7) maritime ports and one river port are under concession, which will continue to change the dynamics of Peruvian exports in all regions of Peru (see Annex). In fact, the total of committed investments amounts to US$ 2,811.7 million (including VAT), which are being gradually executed in accordance with the concession contracts signed by the investors and the State in each case. In particular, the expansion of Muelle Sur in Callao and the modernization of the Salaverry port will accelerate the pace of exports in two central axes. 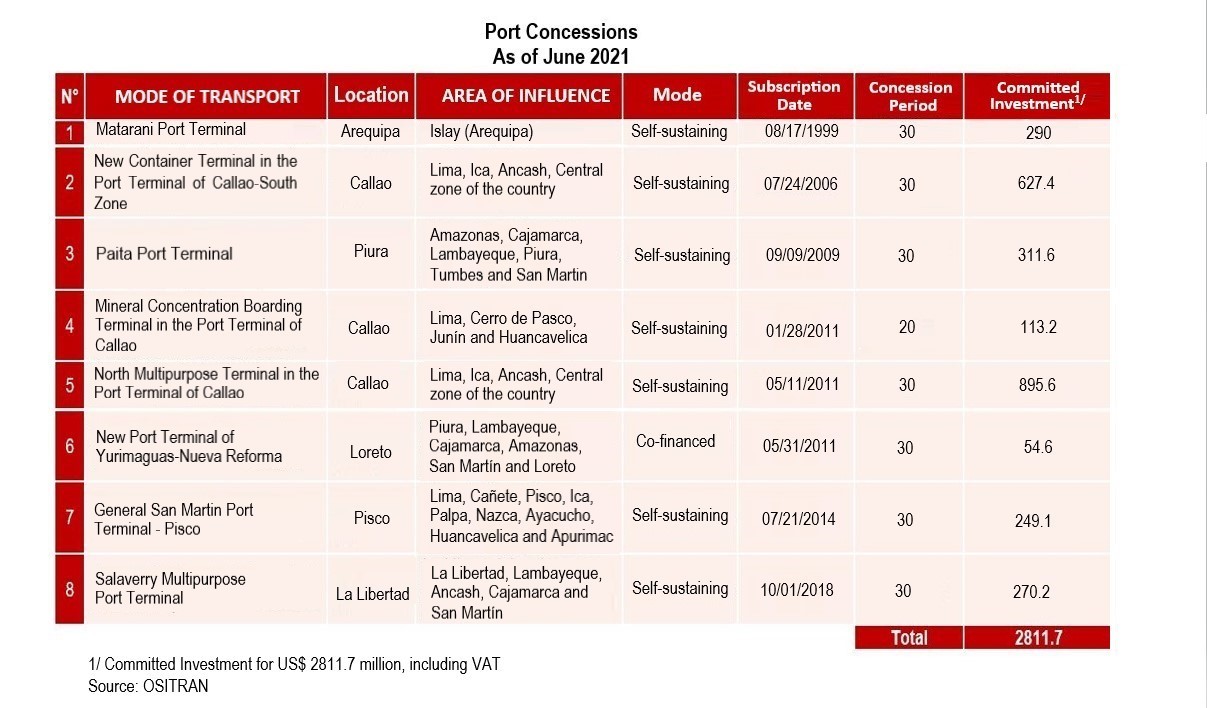 For more information about PROINVERSIÓN you can visit our promotional website: https://www.investinperu.pe