October 14, 2021. Lima, Peru.- The Private Investment Promotion Agency (PROINVERSIÓN) has analyzed the impact of Public-Private Partnerships (PPPs) of the tourism sector on the economic and social development of the country.

PPPs in the tourism sector have made it possible to take advantage of Peru's cultural and natural potential and generate an indirect impact on lodgings, restaurants and tourism companies, boosting employment. To date, PROINVERSIÓN has carried out three projects in concession under Public-Private Partnerships modality (Huachipa Recreational Ecological Center, the concession of the operation and maintenance of Chaco la Puntilla Tourist Marina Lot E and Kuelap Gondolas) with a joint investment of more than US$ 27 million.

In particular, the "Kuelap Gondola Systems" Project has made it possible to reconfigure economic activity in the Amazon region. This project, which emerged as a Co-financed Government Initiative, was awarded on May 30, 2014 to the Kuelap Gondola Consortium, which assumed the design, construction, equipment and operation of the gondola system for a concession period of 20 years. Similarly, the concession of Huachipa Recreational Ecological Center (CER Huachipa), houses about 286 species of animals and 400 wild plants and has managed to maintain a good management of wildlife, obtaining a score of 5 out of 5 according to the ZoObservatorio of OSINFOR in 2018.

Tourism PPP is a mechanism used in multiple parts of the world to take advantage of the tourism potential of each region. Faced with the continued growth of travel and tourism, some governments have seen opportunities in the use of PPPs in this segment, particularly in heritage sites and national parks. For example, in Australia, the North Head Quarantine Station heritage project was concessioned for a period of 20 years, which allowed the rehabilitation and conservation of the cultural and natural asset and increased the number of visitors. In the same way, in New Zealand, the Abel Tasman National Park – with an area of 23,000 hectares – hosts several tourist concessions for kayaking and guided walking.

These projects allowed to generate regional impact with sustainability.  The use of PPPs has made it possible to develop sustainable tourism, which is reflected in tourism assets with high environmental and social standards while taking advantage of the efficiency and creativity of the private sector. Thus, for example, there are several Ecotourism projects with positive impacts on the conservation and attraction of tourists on Chumbe Island in Tanzania and Maputo Special Reserve in Mozambique.

IMPACT OF PPPS IN THE PERUVIAN CASE

One of the most important projects in this area has been the Kuelap Gondolas, which is the first regional project on which we have evidence of its direct and indirect impacts and which will serve as the basis for the next projects in the country.

First, Kuelap Gondolas have increased visits to the Kuelap archaeological center and generated more tourism in the Amazon region. Before the execution of the project there were only two ways to access Kuelap (by vehicle or walking), which was risky and costly in time. However, the implementation of the project has made it possible to reduce the transit time from Tingo district to Kuelap from approximately two (2) hours to only 20 minutes. This improvement in time allowed to increase the tourist attraction of the area. The project began its commercial operation in March 2017, making the archaeological complex of Kuelap from having 56 thousand visitors in 2016 to 103 thousand in 2017, increasing the arrival of tourists by 84% in just one year. In fact, Lahura (2019) estimates that the gondolas allowed to increase visits to Kuelap by 100% with respect to a synthetic indicator that seeks to capture the situation of the archaeological rest without the gondolas.

Likewise, it was possible to promote the arrival of tourists to the tourism circuit of the Amazon region. For example, Gocta waterfall tripled the influx of visitors in the period 2016 - 2019, from 20,292 visitors in 2016 to 59,531 visitors in 2019. Similarly, Leymebamba Museum, in 2019 doubled the number of visitors compared to 2015.

Second, Kuelap gondolas have become an additional tourist attraction in the area. These gondolas are an unprecedented project in the country that increases the arrival of national and international tourists who take advantage of the view and can visit the archaeological complex. However, it is interesting to identify that the number of users of the gondolas is usually higher than the visit of the Kuelap Fortress. It is an indicator that some visitors go to the region to live the experience of the gondolas

Users of Gondola system and Visitors of Kuelap Fortress
(Thousands) 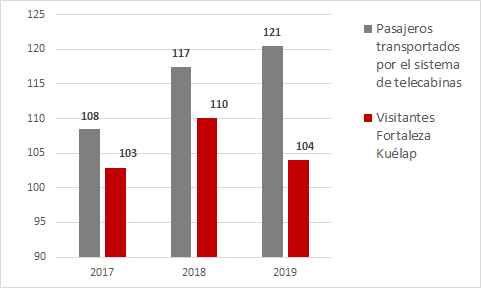 Third, the take-off of the gondolas generated direct dynamism in other trade and services activities in Nuevo Tingo. Thus, one of the most benefited sectors has been the segment of restaurants and hotels. For example, the number of guests increased from 379 thousand in 2014 to 602 thousand in 2019 in Amazonas. Most of these visitors wanted to go to the archaeological complex, the catacombs, the Gocta waterfall, among other attractions. In addition, according to the study by Mincetur, restaurants and food and beverage establishments increased by 250% in Nuevo Tingo between 2014 and 2017. This also created jobs for tourism services. In fact, the number of tour operators in the area increased from 11 in 2014 to 37 in 2017.

The country still has a lot of natural and cultural potential to take advantage of, guaranteeing its sustainability. In fact, Peru has 1,729 natural sites, 2,187 cultural manifestations and has one of the wonders of the world. However, 92% of the tourist resources inventoried still do not provide adequate services to the public, which generates a wide space to improve. In fact, when we compare the arrival of international tourists with other countries with wonders of the world, we are still behind several of them (See graph). 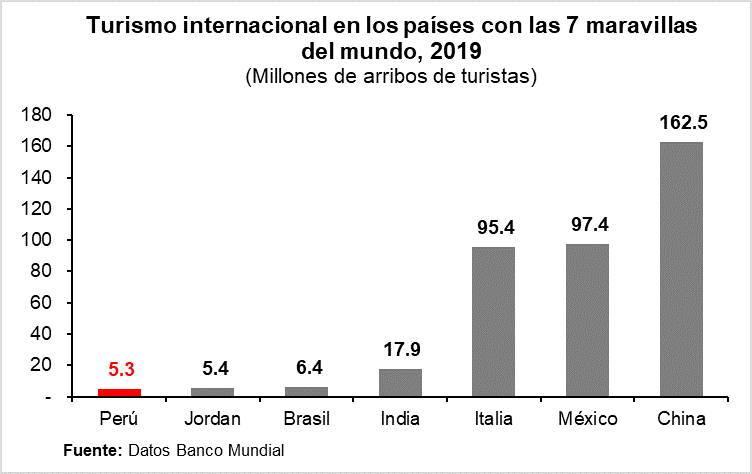 To bridge this gap, PROINVERSIÓN currently has two projects in its portfolio with a total investment of more than US$ 270 million. Choquequirao Project seeks to improve tourist accessibility to the Choquequirao Archaeological Park in the Cusco region. This project includes road networks, trekking routes, cable transport systems, which will increase the flow of tourists and the satisfaction of visitors. Along with this, Cerro San Cristóbal Gondola Tourism Project will improve tourist accessibility to Cerro San Cristóbal through cable transport systems and thus be able to properly take advantage of the tourist potential of the Historic Center of Lima and Rimac district. Both projects are expected to benefit close to 1 million visitors per year and continue to carry on the benefits of the successful Gondolas of Kuelap experience.

For more information on our portfolio of projects, visit our promotional website: https://www.investinperu.pe/en/projects/proinversion-project-portfolio.